THE CRISIS IN AMERICAN AGRICUTURE

Since 1981, over 500,000 of the most efficient producers of American food have been put out of business. Of the 640,000 American family farmers who remain, 120,000 will be shut down within two years, and another 200,000 are teetering on the brink of extinction. While the prices the American consumer pays at the grocery store average 30 percent more than they did six years ago.

Where’s all the money going? To the middlemen – the giant processors and international shippers who re making obscene profits off a federal farm policy that is driving family farmers out of business, undermining the benefits the consumer receives from the competitive structure of agriculture, adding to our national trade deficit, and threateneing to increase interest rates by 2 to 3 percent.

And who’s funding this program? Taxpayers and consumers to the tune of $26 billion in subsidies last year to agribusiness conglomerates. While Kellogg’s return on equity over the last fiver years averaged 33.4percent, the farmers nationwide were receiving a minus 13.4% return. The value of the wheat farmers produced to go into a $1.41 box of General Mills’ Wheaties may have fallen by 42% per bushel, but the price of that 12-ounce box on the grocery store shelf rose by 36%.

If this trend continues, agribusiness monopolies will dictate how our land is used, what we grow, what we eat, and what price we pay for our food.

The Save the Family Farm Act addresses these problems. 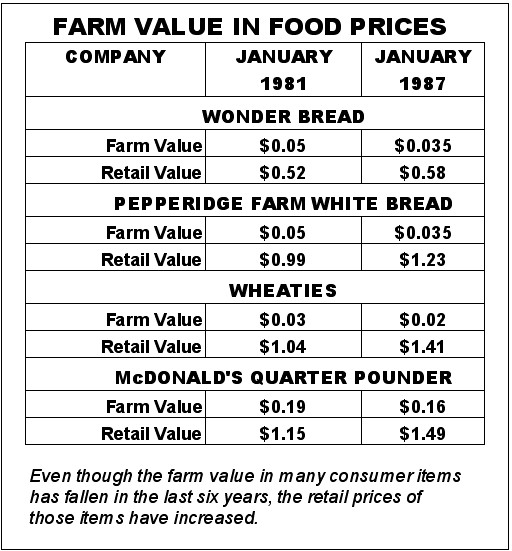 “Falling food prices were disastrous for farmers, but the losses they suffered matched the profits reaped by the next link in the food chain – the processors.”

Under current Administration policy, the nation’s farmers realized a return on equity of minus 13.4 percent. According to Forbes, food processing conglomerates over the past five years have averaged outrageous returns on equity.

According to the Food and Policy Research Institute of the University of Missouri-Columbia and Iowa State University, the Save the Family Farm Act will double net farm income. 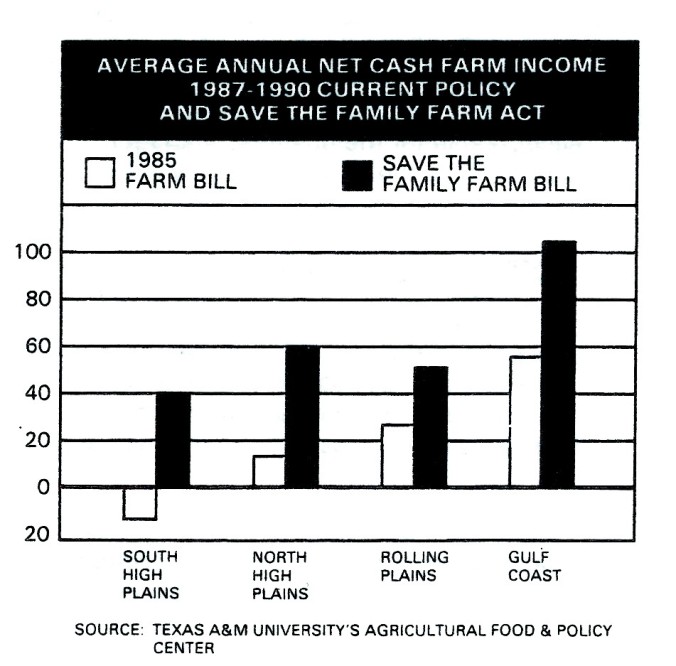 The A&M study found that only the Save the Family Farm Act would produce a positive net cash income in every region of Texas.

A Texas A&M study concludes that the net farm income for each of the major farming regions of Texas will double and, in some cases, quadruple. The study also concludes that the probability of success for representative Texas farms is between 90 and 100 percent under the act. Income from farm exports will increase nationwide by at least 60 percent.

Because the costs of the save the Family Farm Act are paid for in the market pace and not in the tax return, consumers will see an average annual food price increase of 1.6 percent. At the same time, the percentage of the average consumer’s income spent on food will decrease by one-third by 1995.

The debt owed by American farmers is more than the combined debts of Mexico and Brazil. Under current policy, $66 billion (a little over one-fourth the farm debt) cannot be recovered. The debt restructuring provisions of the Save the Family Farm Act will prevent default on over half this debt, greatly reducing inevitable increases in consumer interest rates.

The increased farm values resulting from the Save the Family Farm Act, if passed through in their entirety to consumers, would increase food prices by 1.6 percent per year. 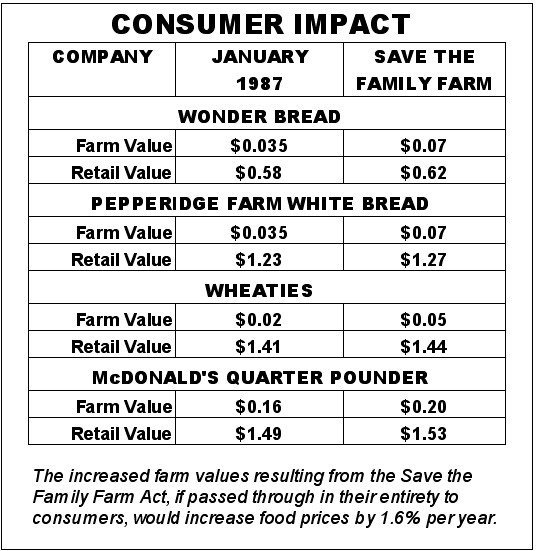 The Save the Family Farm Act provides the only avenue before Congress for a full-scale assault on hunger and malnutrition in this country without the appropriation of new funds. It advocates the conversion of a portion of the money now spent on agribusiness subsidies to provide funding and outreach for programs to feed the hungry and malnourished.

Through acreage reduction, the Save the Family Farm Act will remove environmentally sensitive farmland from production. It will also reduce the use of chemical fertilizers in agricultural production.

The current crop monitoring functions of the U.S. Department of Agriculture will enable that department, without hiring any additional employees, to make sure producers are accountable for the business management provisions of the Save the Family Farm Act.

Current farm policy has driven most of those who have entered farming in the last 15 years out of business. The Save the Family Farm Act provides a means for young farmers to enter the business and stay in business.

“The Save the Family Farm Act is our only chance to save the independent, competitive structure of food production in this country.”

WHAT THE SAVE THE FAMILY FARM ACT DOES

• Rescues 160,000 family farmers who would otherwise go out of business and enables 360,000 others to earn a decent living once again.

• Eliminates up to $15 billion in taxpayer subsidies per year.

• From these savings, makes billions of dollars available every year for food assistancew for the poor and near poor.

•Ensures that environmentally-sensitive farmland is removed from production.

“The Save the Family farm Act gives Americans a way to do far more good for our farm econmomy by spending less.

From the Texas Department of Agriculture, Farmers Assistance Program, during the administration of Jim Hightower.

League of Rural Voters, (IATP), “Beyond the Crisis: Solutions for Rural America,” https://www.youtube.com/watch?v=pEnAZ9_KRRs&list=PLA1E706EFA90D1767&index=8 .

2 thoughts on “Save the Family Farm”